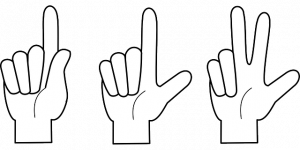 The three labels for information sources in this category are, respectively, primary sources, secondary sources, and tertiary sources.

When you make distinctions between primary, secondary, and tertiary sources, you are relating the information to the context in which it was created. Understanding this relationship is an important skill that you’ll need in college, as well as in the workplace. The relationship between creation and context helps us understand the “big picture” in which information operates and helps us figure out which information we can depend on. That’s a big part of thinking critically, a major benefit of actually becoming an educated person.

Primary Sources – Because it is in its original form, the information in primary sources has reached us from its creators without going through any filter. We get it firsthand. Here are some examples that are often used as primary sources:

Secondary Source – These sources are translated, repackaged, restated, analyzed, or interpreted original information that is a primary source. Thus, the information comes to us secondhand, or through at least one filter. Here are some examples that are often used as secondary sources:

Tertiary Source – These sources further repackage the original information because they index, condense, or summarize the original.

Tertiary sources are usually not acceptable as cited sources in college research projects because they are so far from firsthand information. That’s why most professors don’t want you to use Wikipedia as a citable source: the information in Wikipedia is far from the original information. Other people have considered it, decided what they think about it, rearranged it, and summarized it–all of which is actually what your professors want you, not another author, to do with the information in your research projects.

The Details Are Tricky— A few things about primary or secondary sources might surprise you:

It’s easy to think that it is the format of primary sources that makes them primary. But that’s not all that matters. So when you see lists like the one above of sources that are often used as primary sources, it’s wise to remember that the ones listed are not automatically already primary sources. Firsthand sources get that designation only when researchers actually find their information relevant and use it.

For instance: Records that could be relevant to those studying government are created every day by federal, state, county, and city governments as they operate. But until those raw data are actually used by a researcher, they cannot be considered primary sources.

Another example: A diary about his flying missions kept by an American helicopter pilot in the Viet Nam War is not a primary source until, say, a researcher uses it in her study of how the war was carried out. But it will never be a primary source for a researcher studying the U.S. public’s reaction to the war because it does not contain information relevant to that study.

First, journal articles that report new research for the first time are usually based on data. So some disciplines consider the data to be the primary source, and the journal article that describes and analyzes them is considered a secondary source.

However, particularly in the sciences, the original researcher might find it difficult or impossible (he or she might not be allowed) to share the data. So sometimes you have nothing more firsthand than the journal article, which argues for calling it the relevant primary source because it’s the closest thing that exists to the data.

Second, even journal articles that announce new research for the first time usually contain more than data. They also typically contain secondary source elements, such as a literature review, bibliography, and sections on data analysis and interpretation. So they can actually be a mix of primary and secondary elements. Even so, in some disciplines, a journal article that announces new research findings for the first time is considered to be, as a whole, a primary source for the researchers using it.

Consider the sources below and the potential circumstances under which each could become a primary source for you to use in your research.

Despite their trickiness, what primary sources usually offer is too good not to consider using because:

What sources are considered primary and secondary sources can vary from discipline to discipline. If you are required to use primary sources for your research project, before getting too deep into your project check with your professor to make sure he or she agrees with your choices. After all, it’s your professor who will be grading your project. A librarian, too, can verify your choices. Just remember to take a copy of your assignment with you when you ask because the librarian will want to see the original assignment. After all, that’s a primary source!