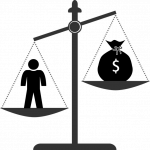 Values are standards or ideals with which we evaluate actions, people, things, or situations. Beauty, honesty, justice, peace, generosity are all examples of values that many people endorse. In thinking about values it is useful to distinguish them into three types:

The Role of Facts and Values

The following are descriptive statements. they purport to describe facts :

These, however, are statements about values :

Philosophers usually distinguish between two kinds of values: intrinsic and extrinsic. Something is supposed to have extrinsic value when it is not valued for its own sake, but because it contributes to some further purpose, or because it helps bring about something else of value. So a particular kitchen knife might be said to be very valuable in this extrinsic sense – it is valued not for its own sake but because it can be used to satisfy certain culinary purposes that we treasure.