Have you ever been asked to persuade a reader in your writing?

Persuasive writing is a genre of writing that is intended to convince, motivate, or move readers toward a certain point of view or opinion. This is a common genre of writing in nursing, a profession that is committed to promoting social justice and often advocates for equitable and inclusive conditions. Nursing has a legacy of positive social change, and nurses often engage in lobbying, letter-writing, and other forms of political action. They often write persuasively when challenging or exposing the socio-political context that informs health and healthcare (e.g., health policy, social determinants of health, and budget cuts).

The act of trying to persuade intrinsically means that more than one opinion on the subject can be argued like a debate. See Figure 4.6. The writer assumes a viewpoint and argues that viewpoint throughout the writing. The term “argument” may conjure images of people yelling in anger. In scholarly writing, however, an argument is very different: it is a reasoned opinion supported and explained by evidence. Written arguments can advance knowledge and ideas in a positive way – but they often fail when they are based on ranting rather than reasoning. 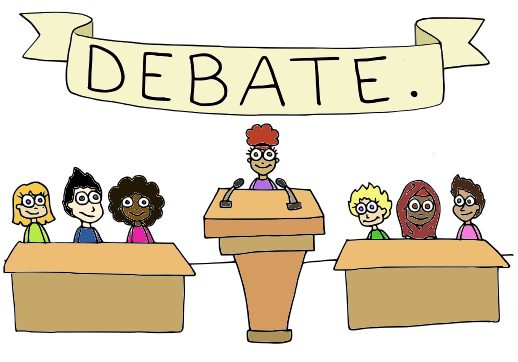 In persuasive writing, you should present a well-rounded, fact-based point of view based on strong, substantiated evidence, but also ensure you present an argument that looks at the topic from multiple angles. Now, you may ask, “How can my argument be convincing if I present ideas contrary to my main point of view?” It is important that you demonstrate to the reader that you understand the topic from various angles and have a full understanding of it. This will garner credibility as you try to persuade the reader. If you leave gaps or are inattentive to opposing viewpoints, the reader may assume this is an omission on your part. Furthermore, critical thought and reflection are effective ways to dismantle objections to your point of view.

There are many ways to write a paper that involves persuasive writing. Here are a few steps:

1. Choose a topic that you feel passionate about. If your instructor requires you to write about a specific topic, approach the subject from an angle that interests you.

2. Read and prepare as much you can about the topic. Search for literature that both supports and counters your argument.

3. Begin your paper with an engaging introduction. Your main point should typically appear somewhere in your introduction, in which you identify your main ideas and then outline the argument that will follow.

4. Begin with most important points, because this will immediately captivate your readers and compel them to continue reading. Provide explanations and evidence to support your points: use sound, credible evidence. Use a balance of facts and opinions from a wide range of sources, such as scientific studies, expert testimony, statistics, and personal anecdotes. Each piece of evidence should be fully explained and clearly stated.

5. Identify opposing points of view and provide a thorough, evidence-informed, convincing argument challenging these views. Acknowledging and explaining points of view that may conflict with your own helps build credibility and trust in your audience. You should also state the limits of your argument. This demonstrates that you are reasonable and honest to those who may naturally be inclined to disagree with your view. By respectfully acknowledging opposing arguments and conceding limitations to your own view, you set a measured and responsible tone.

6. Write a conclusion that effectively summarizes the main argument and reinforces your thesis. You will want to leave the reader with a strong impression or a call to action.

What to keep in mind?

As you write in a persuasive style, here are some pointers to keep in mind:

This page was remixed with our original content and with editorial changes, adapted from:

Writing for Success 1st Canadian Edition by Tara Horkoff is licensed under a Creative Commons Attribution-NonCommercial-ShareAlike 4.0 International License, except where otherwise noted. Download for free at: https://opentextbc.ca/writingforsuccess/