As should be clear by now, conducting research on humans presents a number of unique ethical considerations. Human research subjects must be given the opportunity to consent to their participation in research, fully informed of the study’s risks, benefits, and purpose. Further, subjects’ identities and the information they share should be protected by researchers. Of course, how consent and identity protection are defined may vary by individual researcher, institution, or academic discipline. In section 3.1, we examined the role that institutions play in shaping research ethics. In this section, we’ll take a look at a few specific topics that individual researchers and social workers in general must consider before embarking on research with human subjects. 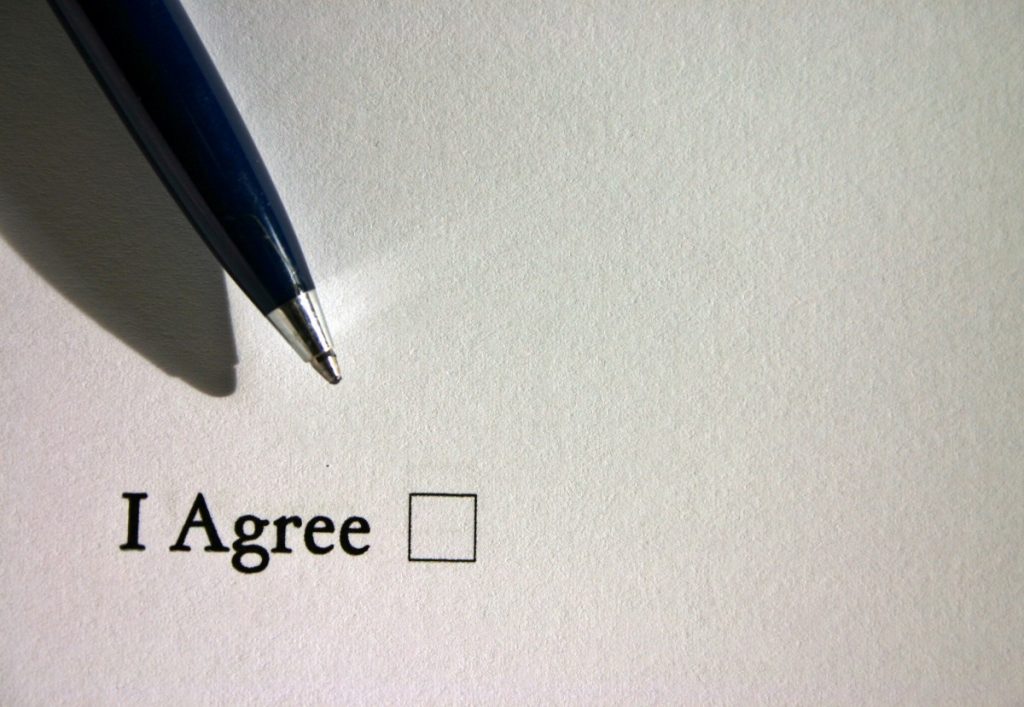 The first requirement is that, in giving their informed consent, subjects may neither waive nor even appear to waive any of their legal rights. Subjects also cannot release a researcher, her sponsor, or institution from any legal liability should something go wrong during the course of their participation in the research (USDHHS,2009). [1] Because social work research does not typically involve asking subjects to place themselves at risk of physical harm by, for example, taking untested drugs or consenting to new medical procedures, social work researchers do not often worry about potential liability associated with their research projects. However, their research may involve other types of risks.

For example, what if a social work researcher fails to sufficiently conceal the identity of a subject who admits to participating in a local swinger’s club? In this case, a violation of confidentiality may negatively affect the participant’s social standing, marriage, custody rights, or employment. Social work research may also involve asking about intimately personal topics, such as trauma or suicide that may be difficult for participants to discuss. Participants may re-experience traumatic events and symptoms when they participate in a study. Even if you are careful to fully inform your participants of all risks before they consent to the research process, you can probably empathize with participants thinking they could bear talking about a difficult topic and then finding it too overwhelming once they start. In cases like these, it is important for a social work researcher to have a plan to provide supports. This may mean providing referrals to counseling supports in the community or even calling the police if the participant is an imminent danger to themselves or others.

It is vital that social work researchers explain their mandatory reporting duties in the consent form and ensure participants understand them before they participate. Researchers should also emphasize to participants that they can stop the research process at any time or decide to withdraw from the research study for any reason. Importantly, it is not the job of the social work researcher to act as a clinician to the participant. While a supportive role is certainly appropriate for someone experiencing a mental health crisis, social workers must ethically avoid dual roles. Referring a participant in crisis to other mental health professionals who may be better able to help them is preferred.

Beyond the legal issues, most IRBs require researchers to share some details about the purpose of the research, possible benefits of participation, and, most importantly, possible risks associated with participating in that research with their subjects. In addition, researchers must describe how they will protect subjects’ identities; how, where, and for how long any data collected will be stored; and whom to contact for additional information about the study or about subjects’ rights. All this information is typically shared in an informed consent form that researchers provide to subjects. In some cases, subjects are asked to sign the consent form indicating that they have read it and fully understand its contents. In other cases, subjects are simply provided a copy of the consent form and researchers are responsible for making sure that subjects have read and understand the form before proceeding with any kind of data collection. Figure 3.1 showcases a sample informed consent form from a research project on child-free adults. Note that this consent form describes a risk that may be unique to the particular method of data collection being employed: focus groups.

As mentioned earlier, the informed consent process includes the requirement that researchers outline how they will protect the identities of subjects. This aspect of the process, however, is one of the most commonly misunderstood aspects of research.

In protecting subjects’ identities, researchers typically promise to maintain either the anonymity or confidentiality of their research subjects. Anonymity is the more stringent of the two. When a researcher promises anonymity to participants, not even the researcher is able to link participants’ data with their identities. Anonymity may be impossible for some social work researchers to promise because several of the modes of data collection that social workers employ. Face-to-face interviewing means that subjects will be visible to researchers and will hold a conversation, making anonymity impossible. In other cases, the researcher may have a signed consent form or obtain personal information on a survey and will therefore know the identities of their research participants. In these cases, a researcher should be able to at least promise confidentiality to participants.

Offering confidentiality means that some identifying information on one’s subjects is known and may be kept, but only the researcher can link participants with their data and she promises not to do so publicly. Confidentiality in research is quite similar to confidentiality in clinical practice. You know who your clients are, but others do not. You agree to keep their information and identity private. As you can see under the “Risks” section of the consent form in Figure 3.1, sometimes it is not even possible to promise that a subject’s confidentiality will be maintained. This is the case if data are collected in public or in the presence of other research participants (e.g., in the course of a focus group). Participants who social work researchers deem to be of imminent danger to self or others or those that disclose abuse of children and other vulnerable populations fall under a social worker’s duty to report. Researchers must then violate confidentiality to fulfill their legal obligations.

Protecting research participants’ identities is not always a simple prospect, especially for those conducting research on stigmatized groups or illegal behaviors. Sociologist Scott DeMuth learned that all too well when conducting his dissertation research on a group of animal rights activists. As a participant observer, DeMuth knew the identities of his research subjects. So when some of his research subjects vandalized facilities and removed animals from several research labs at the University of Iowa, a grand jury called on Mr. DeMuth to reveal the identities of the participants in the raid. When DeMuth refused to do so, he was jailed briefly and then charged with conspiracy to commit animal enterprise terrorism and cause damage to the animal enterprise (Jaschik, 2009).

Publicly, DeMuth’s case raised many of the same questions as Laud Humphreys’ work 40 years earlier. What do social scientists owe the public? Is DeMuth, by protecting his research subjects, harming those whose labs were vandalized? Is he harming the taxpayers who funded those labs? Or is it more important that DeMuth emphasize what he owes his research subjects, who were told their identities would be protected? DeMuth’s case also sparked controversy among academics, some of whom thought that as an academic himself, DeMuth should have been more sympathetic to the plight of the faculty and students who lost years of research as a result of the attack on their labs. Many others stood by DeMuth, arguing that the personal and academic freedom of scholars must be protected whether we support their research topics and subjects or not. DeMuth’s academic adviser even created a new group, Scholars for Academic Justice, to support DeMuth and other academics who face persecution or prosecution as a result of the research they conduct. What do you think? Should DeMuth have revealed the identities of his research subjects? Why or why not?

A social worker should:

It is increasingly common for the internet to be used as a tool for conducting research and as a source of data such as the content of websites, blogs, or discussion boards.  Research ethical principles apply to internet research, but there are ethical considerations that are unique to internet research.

Some of the major tensions and considerations of internet research include defining human subjects, differentiating between what is public and what is private, and making appropriate distinctions between individuals and data.  These tensions lead to new concerns about informed consent, confidentiality, privacy, and harm when conducting internet research.  These are important considerations because they link to the fundamental ethical principle of minimizing harm. Does the connection between one’s online data and his or her physical person enable psychological, economic, or physical, harm?

These three issues represent ongoing tensions for internet research. Although researchers might like straightforward answers to questions such as “Will capturing a person’s Tweets cause them harm?” or “Is a blog a public or private space,” the uniqueness and almost endless range of specific situations has defied attempts to provide universal answers.  The Association of Internet Researchers (Markham & Buchanan, 2012) has created a guide called  Ethical Decision-Making and Internet Research that provides a detailed discussion of these issues.

Figure 3.1 is copied from Blackstone, A. (2012) Principles of sociological inquiry: Qualitative and quantitative methods. Saylor Foundation. Retrieved from: https://saylordotorg.github.io/text_principles-of-sociological-inquiry-qualitative-and-quantitative-methods/ Shared under CC-BY-NC-SA 3.0 License